The Schlosswirtschaft Mariabrunn beer garden is located within a privately owned castle property at the edge of the Bründl-Holz forest 26km north of central Munich, about 10km past the town of Dachau.

The name “Mariabrunn” dates back to 1662 and refers to a chapel and a well. The water of the well was once believed to have magical healing effects and since 1670 Mariabrunn was known as a spa location in Germany. In 1863 Amalie Hohenester, a healing practitioner, bought the estate. Amalie successfully diagnosed and cured many patients. During her lifetime as a healer, Mariabrunn gained European wide recognition. Dignitaries known to have visited include the Empress Sisy of Austria, Tsar Alexander II of Russia and Baron Rothschild of France. 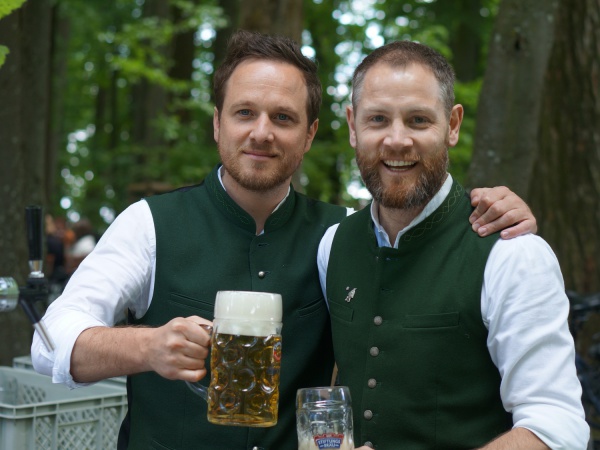 Following Amalie Hohenester's death in 1878, Mariabrunn inevitably lost its popularity as a healing spa. In 1907 the estate was bought by Friedrich Breitling for his son Herbert Breitling. Since then the estate has been owned by the Breitling family whose third generation of family members is happy to guide visitors around the property. A small and historical church remains popular for baptisms and marriages, as well as for pilgrims coming to pray for Holy Maria. Numerous religious and other events are usually combined with visits to the beer garden.

An old brewery is situated behind the beer garden but unfortunately the days of brewing beer at the location ended in year 2000. Not all has been lost however, as the original Mariabrunn Dunkel - an old Bavarian dark lager - is still brewed according to the exact and original recipe by the Erdinger brewery and served fresh from barrels in the beer garden. A Maß of Mariabrunn Dunkel costs €7.50 (May 2017). Other beer types sold are regular Helles (lager) by Fischer's and Erdinger Weißbier (Bavarian wheat-bear).

Today the brewery is functioning as a distillery for liquor which can be bought in a small shop in the courtyard, where locally produced honey and handmade candle products as well as various souvenirs are also for sale.

View of Munich from the hilltop behind the beer garden.

The beer garden and restaurant has been managed since '99 by Bernhard Öttl and Simon Radlmayr, who treat visitors with Bavarian specialties in a truly traditional beer garden environment. There are about 850 seats in the self-serviced area, with mostly fixed-to-the-ground tables, some which have back rests. A serviced terrace includes about 100 seats. On clear days, a short walk up the hill from the beer garden offers a stunning view of Munich with the alps in the background.

The beer garden is open weekdays throughout the summer when the weather is good from noon until 11pm and on weekends and public holidays from 11am.