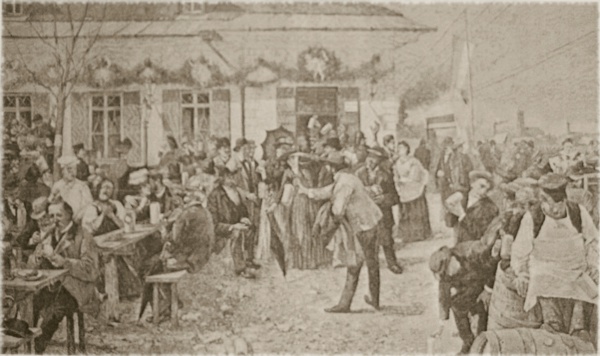 Paulaner am Nockherberg beer garden in 1890

This edict was the reaction on a long quarrel between the breweries and restaurant owners. Already on the 13th of May 1791, some Munich innkeepers from the Au complained to the Elector Karl-Theodor about the beer cellars, which were located near the Isar. The innkeepers said, that the beer cellars ruin their business.

In those days the beer was stored between huge ice blocks in underground cellars. The ice was necessary to cool the beer throughout the summer months, as brewing was only allowed between end of September and middle of April. To improve the cooling, breweries planted chestnut trees on top of the cellars. People collecting beer straight from the breweries usually drunk their first stein on location before going back home. To provide more comfort, the breweries placed tables and benches under the chestnut trees with the result, that more and more people came to the beer cellars and the restaurants lost their guests. The royal edict in 1812 brought an end to the argument between the breweries and innkeepers. The edict stated, that the breweries are allowed to sell their Märzenbier from June to September for straight consumption on location. To bring some guests back to the restaurants, the breweries were only allowed to sell beer and bread, but nothing else. Nevertheless, the beer garden guests started to bring their own food from home and over time this custom turned into tradition.

Throughout the 2012 beer garden season, many Munich beer gardens will celebrate this tradition together with their guests in combination with special events.